Fiber to the x

FTTB, FTTC, FTTD, FTTH, FTTK, FTTN, and FTTP all redirect here. For airports with those ICAO codes, see List of airports in Chad.

Fiber to the x (FTTX) is a generic term for any broadband network architecture using optical fiber to provide all or part of the local loop used for last mile telecommunications. As fiber optic cables are able to carry much more data than copper cables, especially over long distances, copper telephone networks built in the 20th Century are being replaced by fiber.

FTTX is a generalization for several configurations of fibre deployment, arranged into two groups: FTTP/FTTH/FTTB (Fiber laid all the way to the premises/home/building) and FTTC/N (fiber laid to the cabinet/node, with copper wires completing the connection). 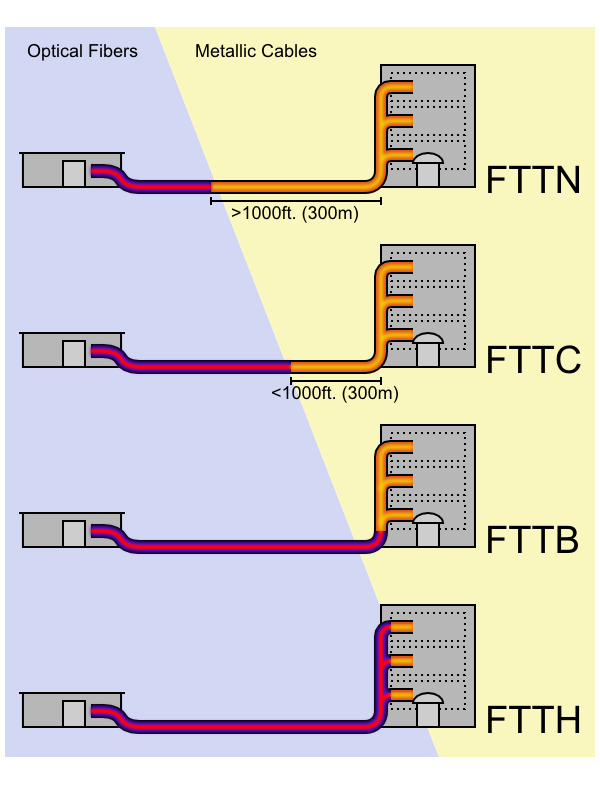 The telecommunications industry differentiates between several distinct FTTX configurations. The terms in most widespread use today are:

FTTP (fiber-to-the-premises): This term is used either as a blanket term for both FTTH and FTTB, or where the fiber network includes both homes and small businesses.

FTTH (fiber-to-the-home): Fiber reaches the boundary of the living space, such as a box on the outside wall of a home. Passive optical networks and point-to-point Ethernet are architectures that deliver triple-play services over FTTH networks directly from an operator's central office.

FTTB (fiber-to-the-building, -business, or -basement): Fiber reaches the boundary of the building, such as the basement in a multidwelling unit, with the final connection to the individual living space being made via alternative means, similar to the curb or pole technologies.

FTTD (fiber-to-the-desktop): Fiber connection is installed from the main computer room to a terminal or fiber media converter near the user's desk.

FTTE / FTTZ (fiber-to-the-telecom-enclosure or fiber-to-the-zone) is a form of structured cabling typically used in enterprise local area networks, where fiber is used to link the main computer equipment room to an enclosure close to the desk or workstation. FTTE and FTTZ are not considered part of the FTTX group of technologies, despite the similarity in name.

FTTdp (Fibre To The Distribution Point) This is very similar to FTTC / FTTN but is one-step close again moving the end of the fiber to within meters of the boundary of the customers premises in last junction possible junction box known as the "distribution point" this allows for near-gigabit speeds.

FTTN / FTTLA (fiber-to-the-node, -neighborhood, or -last-amplifier): Fiber is terminated in a street cabinet, possibly miles away from the customer premises, with the final connections being copper. FTTN is often an interim step toward full FTTH (fiber-to-thehome) and is typically used to deliver 'advanced' triple-play telecommunications services.

FTTC / FTTK (fiber-to-the-curb/kerb, -closet, or -cabinet): This is very similar to FTTN, but the street cabinet or pole is closer to the user's premises, typically within 1,000 feet (300 m), within range for high-bandwidth copper technologies such as wired ethernet or IEEE 1901 power line networking and wireless Wi-Fi technology. FTTC is occasionally ambiguously called FTTP (fiber-to-the-pole), leading to confusion with the distinct fiber-to-the-premises system.

While fibre optic cables can carry data at high speeds over long distances, copper cables used in traditional telephone lines and ADSL cannot. For example, the common form of gigabit Ethernet (1Gbit/s) runs over relatively economical category 5e, category 6 or augmented category 6 unshielded twisted-pair copper cabling but only to 100 m (330 ft). However, 1 Gbit/s ethernet over fiber can easily reach tens of kilometres. Therefore, FTTP has been selected by every major communications provider in the world to carry data over long 1 Gbit/s symmetrical connections directly to consumer homes. FTTP configurations that bring fiber directly into the building can offer the highest speeds since the remaining segments can use standard ethernet or coaxial cable. Google Fiber provides speed of 1 Gbit/s.

Fiber is often said to be "future-proof" because the data rate of the connection is usually limited by the terminal equipment rather than the fiber, permitting substantial speed improvements by equipment upgrades before the fiber itself must be upgraded. Still, the type and length of employed fibers chosen, e.g. multimode vs. single-mode, are critical for applicability for future connections of over 1 Gbit/s.

FTTC (where fiber transitions to copper in a street cabinet) is generally too far from the users for standard ethernet configurations over existing copper cabling. They generally use very-high-bit-rate digital subscriber line (VDSL) at downstream rates of 80 Mbit/s, but this falls extremely quickly over a distance of 100 metres.